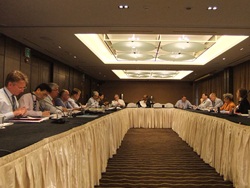 The subject of places of refuge is for ports and harbors in general and for the International Association of Ports and Harbors (IAPH) in particular an important issue. It is evident that this is because of the constant that a place of refuge is very often a port of refuge in combination with the fact that major environmental, economic and financial interests are connected with the operation of giving shelter to a ship in distress. This is the reason why the policy issue of places of refuge has been kept under review by the IAPH over the past decade and why IAPH seeks at appropriate moments the floor to signal its standpoints and concerns.

Read more (Places of Refuge from a Port’s Perspective)

In June 2012, IAPH joined the governments of Denmark, the Netherlands and the United States and five maritime industry associations of BIMCO (Baltic & International Maritime Council), ICS (International Chamber of Shipping), ITF (International Transport Workers’ Federation) and WSC (World Shipping Council) in submitting a formal proposal to IMO to require loaded containers to be weighed to determine their actual weight for consideration by the IMO’s Subcommittee on Dangerous Goods, Solid Cargoes and Containers, September 2012. >Read more

In January/February 2012 the IAPH Port Safety and Security Committee sponsored a survey of members to ascertain the current measures in place for managing overweight containers or incorrectly declared container weights as well as seeking feedback on possible actions that could be taken to improve the situation in order to assist the IAPH Executive in refining the Association’s position on this issue.  >Read more

In December 2011, IAPH joined with the World Shipping Council (WSC), the International Chamber of Shipping (ICS), and the Baltic International Maritime Council (BIMCO) to encourage the International Maritime Organization (IMO) to amend the Safety of Life at Sea Convention (SOLAS) to require, as a condition for stowing a loaded container on board a ship, that the ship and the port facility have a verified actual weight of the container, by issuing a joint press release by the four organizations all having consultative status with IMO. >Read more

In May 2011 the IAPH adopted a resolution urging international organizations, including the International Maritime Organization (IMO), to adopt requirements for shippers or their agents to declare and document cargo correctly including weighing containers at origin. >Read more