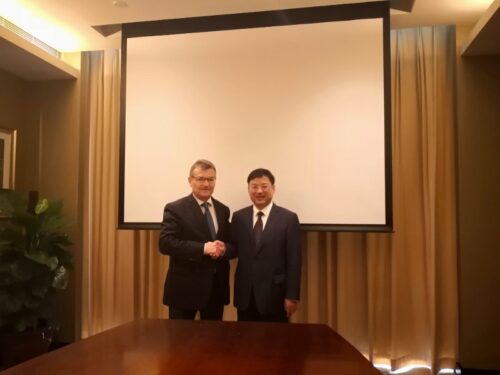 The Ningbo Zhoushan Port Group, which manages the port complex of Ningbo and Zhoushan in China, decided to join the International Association of Ports and Harbors. That was confirmed following the Maritime Silk Road Port International Cooperation Forum, which took place in Ningbo mid-June.

IAPH President Santiago Garcia Milà gave a keynote address at the Forum and met on this occasion with Ni Chenggang, the Vice General Manager of Ningbo Zhoushan Port Group to conclude the membership arrangement (photo).

“We are delighted to welcome Ningbo Zhoushan Port Group as a member of our organisation”, said the IAPH President, “With the ever-growing impact of the Chinese Belt and Road strategy, we look forward to working together to boost trade and stimulate economic growth across Asia and beyond.” Ningbo and Zhoushan represent the largest port complex in the world. In 2017, the port group handled a total cargo throughput of one billion tons. The port complex is part of the Maritime Silk Road and has the largest deep-water facilities in China. The port’s maritime connections increased substantially after China’s Belt and Road initiative. In addition, the port launched sea-rail transport services with trains providing services to more than thirty cities in China as well as countries in central and northern Asia and eastern Europe. The container handling volume of its sea-rail transport is expected to surpass 400,000 TEU this year, a 60 percent increase compared to 2017. Ningbo-Zhoushan handled over 10 million TEU from countries along the Belt and Road in 2017, up 16 percent compared to 2016.

“With the Ningbo-Zhoushan Port Group joining IAPH we are considerably strengthening our membership base in China”, concluded Mr Garcia Milà. “This ties in very well with next year’s IAPH World Ports Conference, which we are organising in Guangzhou, at the historical origins of the Silk Road.”