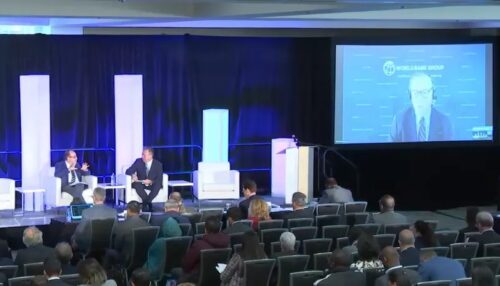 IAPH will now produce a report with the World Bank on the entire #CloseTheGaps exercise with summary of findings of eight regional workshops, six dedicated breakfast regional sessions plus learnings from the main sessions that took place during the #IAPH2022 World Ports Conference in Vancouver.

Commenting at the closing panel session, IAPH Managing Director Patrick Verhoeven reaffirmed the continuity of the process: “The role of this event, the World Ports Conference, is to take stock of progress on closing the gaps together with our institutional partners – the World Bank, UNCTAD , the IMO, as well as with our member ports and their stakeholders.”

Emphasising the strategic relationship with partner S&P Global in the process with its expertise in maritime event content, market intelligence and journalism, Patrick Verhoeven added: “the role of this conference is to be an annual ‘State of the Union’ for the world ports community.”

IAPH will be supporting the team at World Bank on upgrading the content of it’s Port Reform Toolkit based on the mutual experience and knowledge gained on the #CloseTheGaps exercise. IAPH will also continue its collaboration with World Bank colleagues on the digitalization roadmap for those countries that have requested assistance, as well as being one of the supporting organizations in the Bank’s plans for equitable maritime energy transition where the latter has identified a number of promising potential sites for green fuels production and bunkering deployment.

Martin Humphreys, Lead Transport Economist and the Global Lead for Transport Connectivity and Regional Integration at the World Bank commented via his live link from Washington DC : “We have had a long history of constructive partnership with IAPH. In recent years there has been a deepening of that partnership, when we were invited to join the IAPH-WPSP COVID19 taskforce, which led naturally to the discussion around resilience and the state of digitalization in the industry and the dangers already identified of a possible digital divide emerging between countries. This resulted in the production of a joint white paper to accelerate digitalization in the maritime transport chain and World Bank also contributed to the IAPH Cybersecurity Guidelines for ports and port facilities. The work planned is an extension of that allowing us to get a sense of the regional priorities in the key areas, but most importantly what is needed to facilitate change.”