The January-February issue of Ports & Harbors is out

In the cover story of the first 2022 issue of Ports & Harbors, lead transport economist at The World Bank Martin Humphreys talks with IAPH managing director Patrick Verhoeven about advancing digitalisation and decarbonisation in ports and on what it takes to give developing countries a fair business opportunity. They look at how The World Bank and IAPH can jointly address challenges developing countries face on these two key areas moving ahead, closing the gaps on governance, social aspects and operational efficiency to improve overall competitiveness of global ports. All of these topics will be on the agenda at the planned regional workshops ahead of the IAPH 2022 World Ports Conference. Also featuring in this edition: Port of Amsterdam and its study on spatial needs for new fuels; a debate on readiness of ports during surge events; in-depth views of port developments in the Panama Canal and Chile as well as the threat faced by Port Sudan; a Smart Ports feature with PortBase; interviews with our North American vice-president Robin Silvester as well as with our newly-appointed VP for Central and South America José Firmo; an In Court special on conflicts when a spill happens in port; the debut of IAPH’s Port Endeavor UN SDG sustainability game and much more! 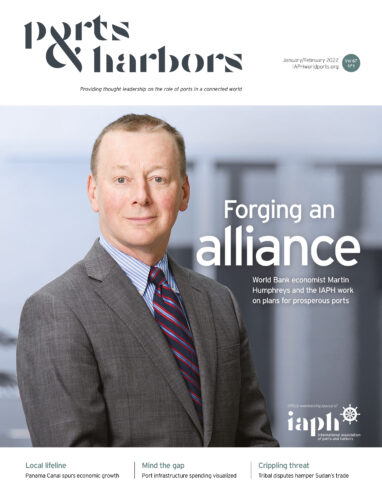