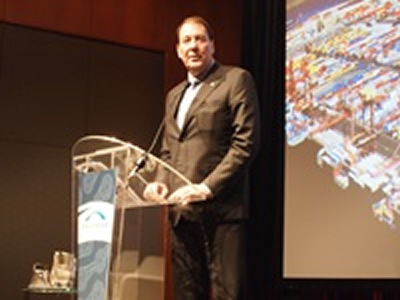 The opening ceremony on Tuesday, 8 April, was officially opened by the Honourable Warren Truss, Deputy Prime Minister of Australia and Minister for Infrastructure, who also delivered a keynote speech on the current port situation in Australia from a country wide and macro-economy perspective. In the ensuing conference sessions, we heard from an excellent panel of speakers recruited worldwide on such stimulating topics as the expansion of the Panama Canal by Mr. Luis Ferreira, a global perspective of port automation by Dr Yvo Saanen, the salvage challenge of raising the Costa Concordia, etc. All the presentations made are now posted on the conference website at http://www.iaphsydney2014.com/program

On the internal household matter, a regular meeting of IAPH Board of Directors was held on Monday, April 7, 2014. Among major agenda items, three vacancies in the IAPH Executive Committee, a vacancy in each of the three regions, were reported to exist at the time of the Board Meeting and it was decided that elections to fill the vacancies be held as soon as practical. For future IAPH World Ports Conferences, presentations were made on the 29th Conference in Hamburg, Germany, June 1-5, 2015, by Hamburg Port Authority and on the 30th Conference, Bali, Indonesia, 2017, by the representative of Indonesia Port Corporations I, II, III & IV.

≫ Minutes of Board Meeting

Prior to the Board Meeting, Special Strategy Meeting No.2 comprising the IAPH Officers and Long Range Planning/Review Committee was held on Sunday, April 6, to discuss ways and means of improving the Association’s relevancy as the global voice of port authorities; empowering technical committees and the Secretariat and creating a stronger leadership and a better process of electing leadership.

The outcome of the meeting was duly reported by President Gilfillan to the Board of Directors who endorsed the proposed action plan:

To put the above action plan into practice, the Board unanimously adopted a Resolution on creation of a Council to replace the Board of Directors and the Executive Committee.

At the end of the meeting, Resolution Expressing Appreciation to the host, Sydney Ports Corporation was also adpoted.