We are delighted to announce that the IAPH 2022 World Ports Conference will be taking place live and in-person from 16 to 18 May in Vancouver, Canada at the Vancouver Convention Centre, a beautiful, inspiring downtown event space with an unbeatable waterfront location. Organised in partnership with host sponsor Vancouver Fraser Port Authority and our events and media partner IHS Markit, the conference will address the ongoing supply chain crunch, which has exposed structural weaknesses in various components of maritime supply chains, including ports. #IAPH2022 will bring together leading port stakeholders to #ClosetheGaps in global seaport competitiveness, setting an agenda to raise the performance of the world’s major port regions. Prior to the conference we’ll be engaging with the IAPH membership to shape the discussions. More details about the conference theme and the preparatory process will be announced in a few weeks from now. Meanwhile, we encourage you to sign up here to receive updates and information about the conference, including information about registration, sponsorship opportunities, updates to the agenda and speakers, who’s attending and more! 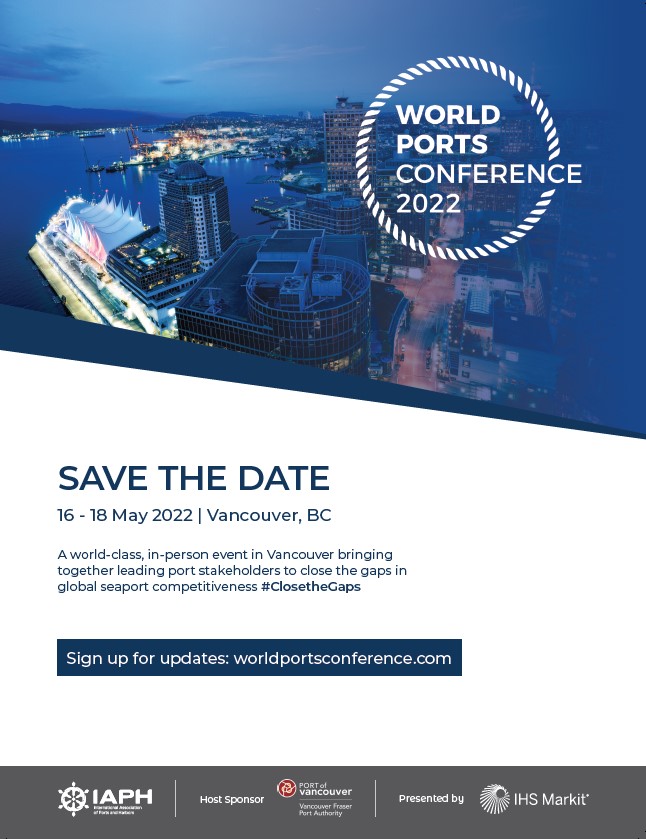 At last week’s IMO Maritime Safety Committee (MSC 104), consideration was given to IAPH’s submission outlining the recently finalised version of the Cybersecurity Guidelines for Ports and Port Facilities and calling for its inclusion in the next version of the IMO Guidelines on Maritime Cyber Risk Management. This was well received by the Committee. Its chair, Mayte Medina (United States), proposed a request to the secretariat to update the IMO guidelines, subject to agreement at the next meeting of the Facilitation Committee (FAL 46) that is due to take place in May 2022. This will provide the necessary recognition and promotion of the IAPH guidelines as is commonly the case in IMO with industry guidelines. We will be liaising with the IMO secretariat shortly to consider further targeted action ahead of FAL 46. Meanwhile, the guidelines are receiving wide industry and media coverage, for instance from the Center for International Maritime Security, The Journal of Commerce, Maritime Executive, Port Technology International and Port Strategy. Members of the IAPH working group that drafted the guidelines will be introducing them at various events in the coming weeks, including at TOC Connect Live and Virtual and SmartPorts Barcelona.

Next week’s IMO Intersessional Working Group on GHG Emissions (ISWG-GHG 10) will be focusing on the role that market-based measures (MBM) can play in the implementation of the IMO initial greenhouse gas strategy. The topic is also on the agenda of the 77th IMO Marine Environment Protection Committee meeting, which takes place at the end of November. An MBM is meant to close the price gap between traditional marine fuels and low- or zero-carbon fuels. Proposals are on the table to introduce such measures in the form of a carbon levy or a cap-and-trade system.  IAPH is contributing to the debate with a submission which advocates that the allocation of a significant share of the revenue generated by an MBM to port-related investments would facilitate the global deployment and use of low- and zero-carbon fuels needed for the decarbonisation of shipping. Paying specific attention to financial support for ports in developing countries could strengthen the support of those countries for MBMs and help a fair and equitable energy transition. Members of the IAPH Climate and Energy Committee will be briefed on the outcome of the debate at ISWG-GHG 10 and preparations for MEPC 77.

The Global Port Hydrogen Coalition held its first meetings this week (12-14 October). The Coalition was launched in June this year as a dedicated working group of the Clean Energy Ministerial (CEM) Hydrogen Initiative. It is the first global forum that brings representatives from ports together with decision-makers from governments as well as industry with the view to accelerate low-carbon hydrogen deployment. The coalition enhances policy dialogue and project-oriented collaboration related to scaling up the production and use of low-carbon hydrogen and hydrogen-based fuels in industrial coastal areas. The coalition builds, among other initiatives, on the work carried out by the IAPH Clean Marine Fuels (CMF) working group, and will be using the World Ports Sustainability Program as the platform to showcase and disseminate hydrogen-related projects in ports. IAPH technical director Antonis Michail joined the plenary meeting on 12 October to highlight IAPH’s work on hydrogen bunkering and the expectations from the coalition’s work programme. You can watch the recording of that session in the video below or via this link. On 13 and 14 October, the suggested deliverables for the coalition were being discussed, with the aim to identify priorities for the coalition’s first year work programme ahead of the 13th Clean Energy Ministerial, which is to take place in the third quarter of 2022 in the United States. Next to the already mentioned project database for hydrogen-related projects in ports, potential deliverables include a study on short-term hydrogen opportunities and barriers, a guide for ports to scale up low-carbon hydrogen, and policy recommendations to CEM ministers with suggestions for how governments may facilitate the scale-up of low-carbon hydrogen production and use in ports and surrounding areas. More information is available from the CEM Hydrogen Initiative website. 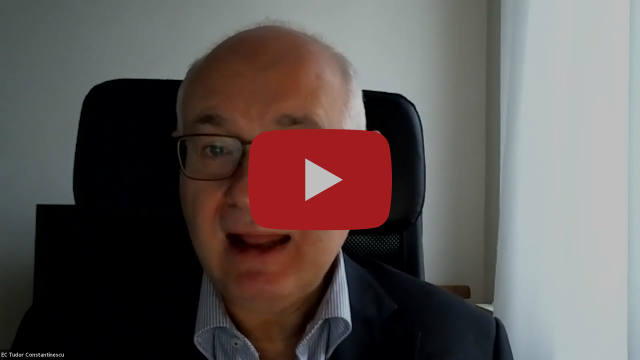 The scores for the ships enrolled in the IAPH Environmental Ship Index (ESI) for the quarter starting 1 October 2021 were released last week. Compared to the previous quarter, the number of ships with a score of 20 or more in the database increased from 4,623 to 4,684 and the number of incentive providers rose from 59 to 60. The ESI was established in 2011 and it identifies seagoing ships that perform better in reducing air emissions than required by the current emission standards of the International Maritime Organization (IMO). Is your port already part of the ESI programme? If not, find out more on the ESI website or contact the ESI team at admin@environmentalshipindex.org. 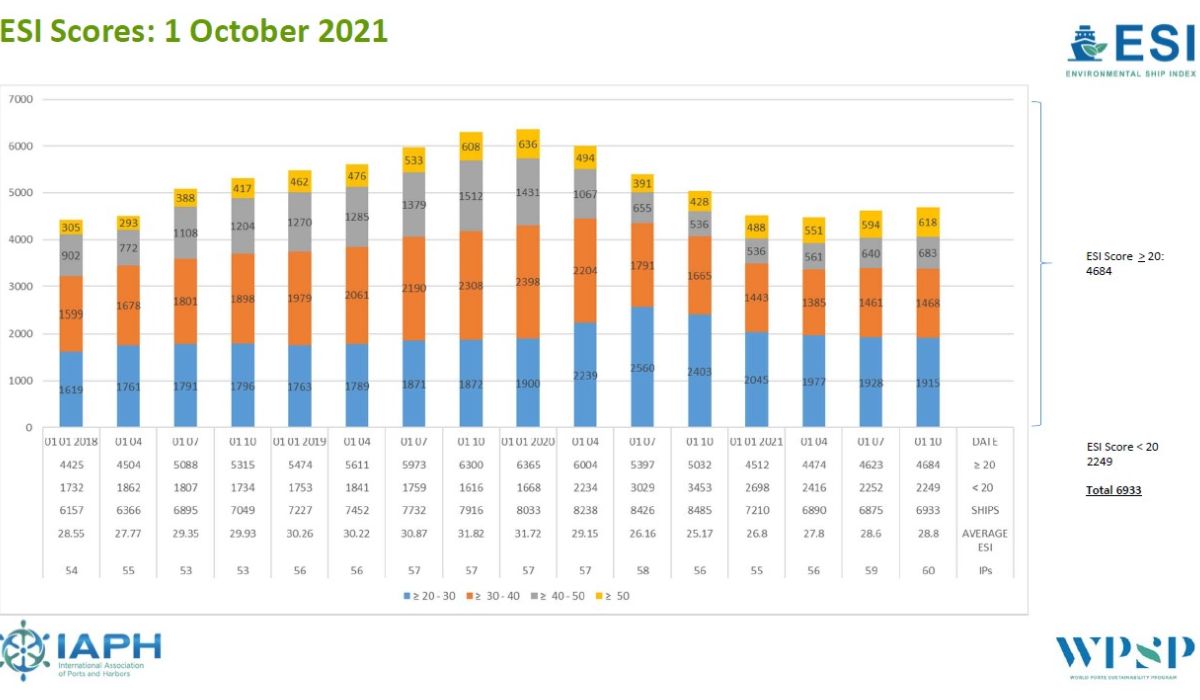 Members of the IAPH Data Collaboration Committee met online on 12 October, under the chairmanship of Pascal Ollivier (Maritime Street). They discussed the implementation of the IAPH roadmap to accelerate digitalisation in ports and exchanged views on the subject with Martina Fontanet, technical officer ports at the subdivision for maritime security and facilitation of the IMO secretariat. The committee also considered the follow-up of the IAPH cybersecurity guidelines and it decided to set up two new working groups: one on innovation and one on automation. Finally, the committee discussed new inputs for its work programme of the coming two years. The next meeting is scheduled for 18 January next year.

Our colleagues at the International Port Community Systems Association (IPCSA) have launched a study that will support the development of port community systems (PCS) around the world, focusing on the practical development of neutral electronic exchange platforms which enable the smooth, swift, and accurate flow of information crucial to efficient ports and the wider supply chain. Building on previous work by IPCSA, including the association’s 12-point guide to building a PCS, the study will cover specific elements of PCS development, including governance, business models, technology, standards, cybersecurity, customs, and community and stakeholder involvement. It will also be accompanied by use cases from around the world. The aim is to create a living document with relevant and practical support, allowing use cases and other elements to be updated simply and on a regular basis, so that the latest information is always available. IPCSA would welcome the input and insight of ports, PCS operators and others in this study. If you are interested to contribute, then contact IPCSA secretary-general Richard Morton: richard.morton@ipcsa.international

At the World Economic Forum’s Sustainable Development Impact Summit, a new report on the financing of sustainable marine and freshwater infrastructure was presented, focusing on green coastal, river and port projects. The report is a joined effort of the International Association of Dredging Companies (IADC), the Central Dredging Association (CEDA), Vital Ports, B Capital Partners and Swiss Re. Based on nine case studies, it discusses what is needed to improve the connection between green-labelled funds and sustainable waterborne infrastructure projects.  The main conclusion is that sustainable waterborne infrastructure solutions are available, have been tested and are economically viable. Private capital could help to accelerate the uptake of such solutions. The report is an important first step towards realising this. It is available from the IADC website.

We are delighted to welcome a new associate member from Canada. Ocean Group is a major supplier of integrated marine solutions and a leader in the Canadian maritime industry, offering harbour towing, marine salvage, dredging, ship repair and other maritime services. With close to 1,000 employees, Ocean operates in 23 business locations in Quebec, Ontario, Alberta, British Columbia, while intensifying its presence in the Caribbean. More information can be found on the company’s website.

Our vice-president for Europe, Jens Meier, visited some of our Spanish member ports last week, calling at Bilbao, Barcelona, and Valencia. In Bilbao, Jens attended the World Maritime Week. On this occasion, he spoke at the Future Port Bilbao conference about the implications of the European Green Deal and the work of Hamburg Port Authority and IAPH on decarbonisation. Jens also met with the management of Bilbao Port Authority. In Barcelona and Valencia Jens had several meetings with the senior management of the port authorities as well as with those members that actively participate in the IAPH technical committees. In Barcelona, he also met with our former president Santiago Garcia Milà.

After a long period of online meetings, the IAPH Policy and Strategy team was delighted to meet in person again last week, with new colleagues Rhona Macdonald and Sisangile Nduna joining Fabienne Van Loo, Antonis Michail, Victor Shieh and Patrick Verhoeven for the first time. The team had a brainstorm session in Antwerp on the work programme for the coming year, including the planning for the 2022 World Ports Conference in Vancouver, the agenda of the technical committees, a review of the World Ports Sustainability Program and the membership action plan. 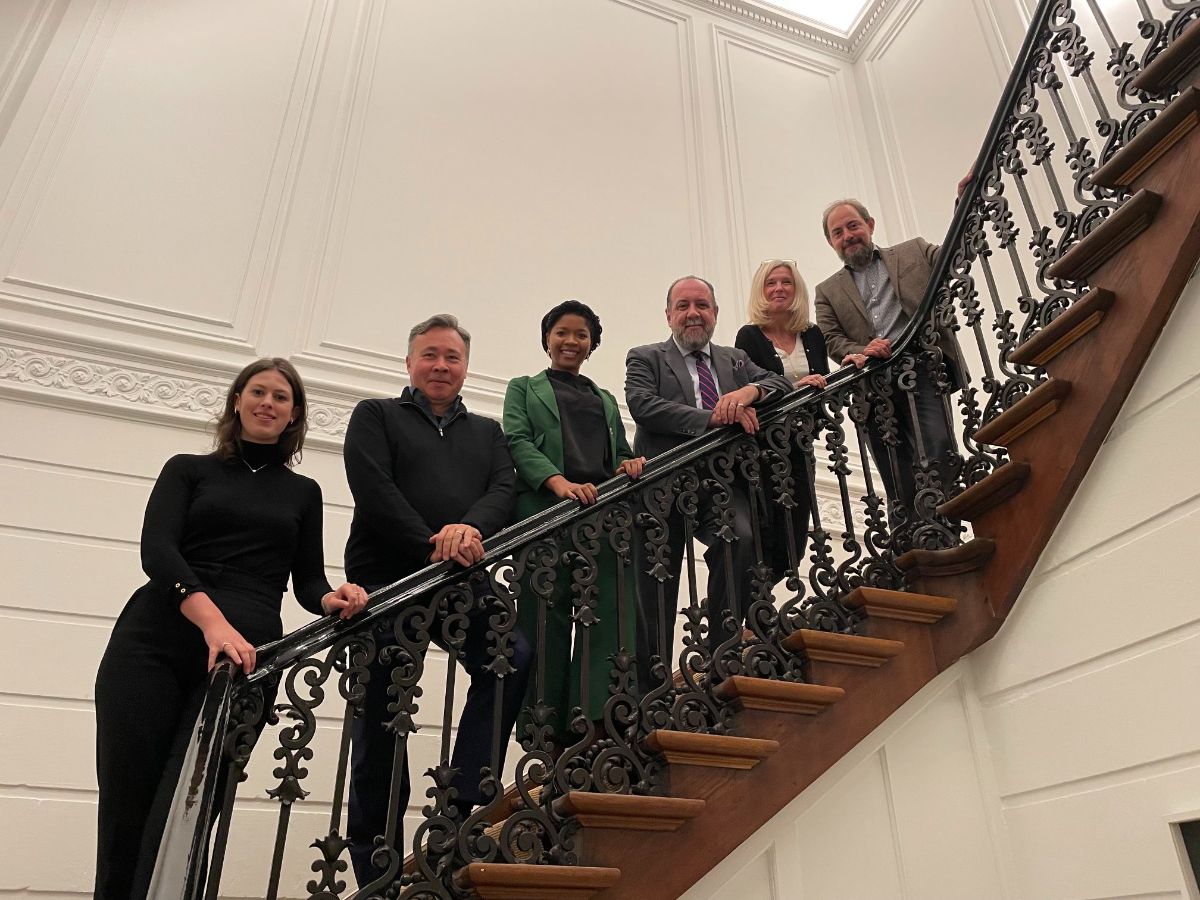